What pushes an online video past the tipping point in terms of sharing and reach? What separates those with genuine momentum and sustained influence from those that generate a brief flare of interest before fading away? Initial momentum driven by established social media influencers, who can spread content far and fast, certainly has a role to play. However, it’s what happens after this initial round of sharing that often makes the difference – and defines the most shared online videos.

The vast majority of these videos succeed because they are able to inspire a second wave of sharing, with influencers and their networks continuing to re-watch videos, comment on them and retweet them. These on-going, often spontaneous conversations are a key driver of long-term influence, reach and virality. However, only a select group of videos achieve this vital second-phase engagement.

When TNS partnered with Twitter and Ogilvy to study the patterns of sharing created by videos online, only one in five of the videos tested succeeded in generating this sustained engagement in the second phase of sharing. However 92 per cent of these videos proved successful in terms of the total reach and involvement that they generated. The challenge for marketers is to maximise the chances of their videos making it into this group.

To do so, they must tackle the question of what motivates sharing’s second wave. Fortunately, we can identify clear and common characteristics amongst the videos that succeed in triggering it – and using these characteristics, we can develop a framework for success in the crucial second phase of the online video life-cycle:

Videos that take place in a very specific moment in time significantly outperform the rest. Only one in five of the online videos tested in the study refer to specific moments in this way, but almost all of these (nine in every ten) are amongst the best performers in terms of sustained reach and engagement.

These ‘time-stamped’ moments include high-profile awards ceremonies (as with Taylor Swift and Selena Gomez celebrating backstage at the Grammy’s) but also common experiences created by the weather (a Panda playing in the snow at the zoo – or the perfectly timed ‘Snow Day’ commercial for Nike).

Their success results from the sense of immediacy and relevance that a specific moment in time produces, and the consequent motivation to retweet/share and comment.

Emotion is central to the effectiveness of any marketing. However, not all emotions are equal. Deeper analysis of the sharing patterns created by online video, reveals subtle but important distinctions between the roles of different emotions.

Humour delivers instant engagement, producing an enthusiastic first wave of sharing and eager viewing. However, humour alone struggles to deliver longevity in terms of interest and engagement; for that you require deeper, more intimate and more complex emotional connections. Videos that succeed in generating powerful emotions like hope or pride (an uplifting film revealing how all races, religions and degrees of disability look the same under the skin, for example) are twice as likely to be top-performers in terms of sustained conversation and sharing.

There’s an interesting parallel here with the role of different emotions in driving long-term brand benefits for TV advertising. TNS’s analysis of Super Bowl ads over the last two years shows that, whilst humorous ads generated an immediate impact – and produced a powerful first wave of sharing on social media – they failed to drive organic social conversations or establish the personal relevance that is key to long-term brand benefits. Ads that were able to align with deeper emotions had far greater success in both of these areas.

Commenting is contagious in a way that simple sharing can’t quite match – and this makes the level of involvement that second-wave influencers have with a video central to its overall success.

Videos with a higher ratio of comments with retweets/shares achieve far more sustained sharing and commenting going forward. Providing viewers with the motive and opportunity to express themselves should therefore be a priority for brands.

In all, 60 per cent of those who retweet/share online video give the opportunity to express their own point of view as a reason for doing so. The opportunity for emotional self-expression is a key driver here, with videos providing a context and permission for talking about feelings, especially when the audience can relate those videos to their own lives. This was the case with John Lewis’s 'Man on the Moon' Christmas ad, for example, which benefited from tackling emotive subject matter that was relevant to large number of families – but rarely discussed. In such circumstances, comment strings often take on a life of their own, creating tangential dialogue that those sharing and watching can feel like they’ve contributed to.

Marketers are often told about digital audiences’ plummeting attention spans – and encouraged to shorten their online videos to fit them. However, the patterns of engagement for the most shared online videos suggest that this oversimplifies the issue. More substantial videos can achieve a high level of sharing – provided that extra time is filled with an engaging story arc.

Longer and more complex stories are one means by which online video can explore deeper and more motivating emotions. As a powerful package for building memories, such stories help to maximise video’s long-term impact whilst drawing audiences back to view again – and as repeat viewing increases so does the propensity to share and express oneself through comments. Amongst the videos that generate sustained momentum beyond their initial posting, 84 per cent generated a high degree of positive sentiment in the comments that they generated. Often this positivity was the result of people identifying with the stories they told.

The potential for videos that are able to incorporate recognisable characters and an emotional journey is demonstrated by Extra Gum’s two-minute love story (a relatively long online video), which has so far generated over 90,000 likes, 65,000 retweets and counting.

It’s not just the content of an online video that shapes its chances of success; the format in which it is delivered also has a vital role to play. 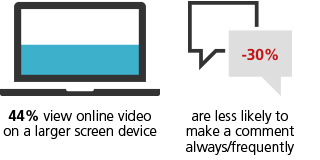 Despite the fact that mobile devices smaller screens can make them a less preferred viewing choice,

people are 42% more likely to frequently comment on a video when they watch it on a mobile or tablet. Those who wait to watch video on a laptop or PC are more inclined to consume their content in lean-back mode rather than engaging, interacting and expressing themselves; they are less a part of an immediate, organic conversation.

The importance of mobile in driving comments and retweets/shares requires a mindset shift on the part of marketers. Any video with an online distribution strategy needs to be built for mobile first and foremost, not merely adapted to it once the creative is complete.

Videos can gain momentum in several different ways. Sharing by top-tier influencers with large networks is one of these. However, video can also generate second-phase sharing at scale through smaller and more intimate networks, or when potential influencers are able to discover it for themselves. This makes ensuring discoverability a key element in a fully rounded online video strategy.

When it comes to the methods of discovery that are most likely to put online video in front of people, general browsing ranks top, followed by social media feeds, friends and family, and then video retweeted/shared by people that they follow. Amongst those who consume video on mobile, and are therefore

Videos that are discoverable across all of these different channels aren’t just likely to be found and watched by more people; they are also more likely to be commented upon, as a result of the sense of ownership that discovery creates. From applying SEO principles to sponsoring content in social media feeds, and working with video platforms to secure positions in top ten lists and related content recommendations,

the mechanics of discoverability have a key role to play in online video’s success.

Tailoring tactics to win in the second wave

The most watched and shared online videos don’t usually achieve this success through a single round of sharing. It’s the sustained conversations they inspire that push them past the tipping point.

To achieve such sustained momentum, marketers need to take a lead from the most successful organic and user-generated videos – and embed motivating reasons to share and comment that can apply to large groups of people, not just established, top-tier influencers. Such motivations might include responding to topical subjects, demonstrating personal knowledge or providing personal endorsement, but sometimes the urge simply to feel part of a conversation is compelling enough.

When we create content that also aligns with specific moments in time, and elicit emotions that people are keen to express and endorse, we encourage a sense of immediacy and ownership that translates initial shares into on-going comments and conversations at scale. When brands succeed in achieving this, and do so within a mobile-prioritised format that’s been optimised for easier discovery, they’ll know the real secrets to online video success.

Behavioural analytics focused on the sharing patterns of 62 English-language online videos on Twitter from 2015 and 2016. Each video’s performance was then assessed on the basis of more than 4.2 million Twitter conversations they generated.